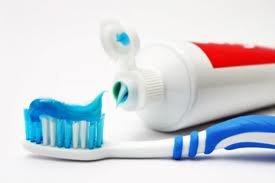 At my daughter’s two year review the health visitor gave her a free toothbrush and tube of tooth paste.  The advise was that children up to three years old should use a toothpaste with a fluoride level of at least 1000ppm (parts per million), particularly in areas such as Liverpool where  the water supply is fluoridated .  I decided to look into this further.  According to the NHS website  fluoride is a naturally occurring mineral found in water in varying amounts, depending on which area of the UK you live in.  Fluoride strengthens tooth enamel improving dental hygiene by reducing the risk of tooth decay.  It also reduces the amount of acid produced by the bacteria on your teeth.  In children fluoride can change the structure of enamel, increasing resistance to acid attacks.  This happens more significantly up to the age of about seven as this is when the enamel is developing, hence a vulnerable time for your child’s teeth.

Tooth decay is caused when acid  in your mouth (produced by bacteria) attacks the outer layers of your teeth by forming a layer called plaque. This can cause cavities/holes in your teeth, infections and abscesses which are particularly painful.  Tooth decay is a huge problem worldwide including the UK, although this can vary regionally and mainly affects deprived areas.  One interesting fact that I read was that  tooth decay is still one of the most common causes of hospital admission in children in the UK.  I wouldn’t have known this.

According to a report published in The Times in September 2013 an NHS report suggests that children need fewer fillings when water is added to tap water.  Most water supplies in the UK contain some level of fluoride and around six million people currently have  water that has had the fluoride concentration raised to around one part per million (1ppm), the level thought to reduce tooth decay.  This is up to individual local authorities.  There are however arguments against the process and claims that adding fluoride to the water can cause things like dementia later in life.  None of this is however scientifically proven.

Where else does fluoride come from?  As fluoride is a trace element found in the environment small amounts are found naturally in the air that we breath and in the sea, therefore can also be found in seafood.  Interestingly a common source of fluoride is in the good old classic, British cup of tea.  Cheaper brands of tea contain more fluoride and there has been concern that people drinking this type of tea are exceeding their daily dose.  Infant formula also contains fluoride as does food washed in fluoridated water. Drinking water is however one of the richest sources and as mentioned previously fluoride can be added in small amounts to products such as toothpaste and mouth wash.

So if you want to reduce tooth decay and improve your child’s smile  then fluoride tooth paste is a necessity.  For yourself, this information is possibly too late.  At London Smiling,  comprehensive oral health care is provided including a general  well being dental assessment.  Whatever you need to create that natural, beautiful smile to give you the confidence to get through the day.