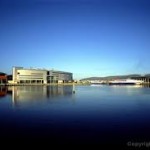 As the capital of Northern Ireland, it’s no wonder Belfast gets its fair share of live music to bring in audiences from far and wide. February is no different – a whole host of musicians and groups will be setting foot in this beautiful city to perform some of their favourite tracks from their catalogue of work and give people a night to remember.

Why not spend a couple of days in the Northern Ireland capital rather than making a quick visit for your gig of choice? There’s no reason why you can’t enjoy a city break here, to cheer you up from the post-festive blues. Click here if you need to find some budget accommodation for your stay to keep your visit as affordable as possible.

Performing in support of his fourth studio album, The Evolution of Man, Example (AKA Elliot Gleave) will be taking to the stage to perform some favourite tracks from his catalogue of work. Guest support from previous collaborators, Benga.

American alternative rockers, The Killers, are back after a recent hiatus and are planning to continue to take the world by storm. Having already proven just how popular this band is, you can expect to hear some of their signature rock anthems blasting out from the arena on that night, including classics Somebody Told Me and Mr. Brightside.

Taking to the Waterfront stage, Tommy Fleming and his band will be joined by The Irish Concert Orchestra to bring to you a show to remember.

There’s only single seats left at this show, with the majority of tickets having been sold out. Winners of the 2011 X Factor, Little Mix, will perform some of their work, including number one hit Cannonball.

Take your pick from some of the top names in music at the moment or opt instead for a smaller, more intimate gig at one of the local venues in the city. Enjoy a spot of sightseeing the following day, before returning home knowing you’ve had a memorable evening.