I recently watched a bit of a scaremongering documentary on Channel 5 with my husband David, aptly entitled “50 Shocking Facts About Diet and Exercise”.  To me a lot of the content was common sense and again I concluded that a natural, balanced diet is the way forward and that a little bit of everything in moderation won’t do you in any harm. 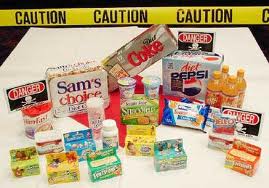 David however has now decided that he is going to change his soft drinking habits (something I have been telling him for years!) due to the  knowledge that he gained through the programme on aspartame, particularly in his precious favourite – diet coke!  Again I think moderation and the more processes that a food product goes through in it’s manufacture then surely the more harmful it will be to your insides.

According to the government’s Food  Standards Agency (FSA) aspartame is an intense sweetener, approximately 200 times sweeter than sugar, which has been used in soft drinks and other low-calorie or sugar-free foods throughout the world for more than 25 years. It is also referred to as E951.

Channel 5’s documentary informed viewers that aspartame and other artificial sweeteners are carciogenic and neurotoxic.  Research has linked excessive consumption of the sweetener to diabetes, fibromyalgia, seizures, depression and certain forms of cancer to name a few.  There is however no general consensus of opinion on this, as far as I can see, no definite proof either way. Evidence does seem to be moving towards these chemicals/substances being bad for you so as far as I am concerned there must be some truth in it and why take the risk, particularly with your children?  If you fancy the occasional fizzy drink then you are not necessarily doing the best thing for your body by choosing the diet version.  I am glad that I haven’t got a sweet tooth to be honest as it makes my water choice easier!  Much research also shows that consuming diet soft drinks can make you hungrier and crave more sugar which also has negative affects.

I guess one think that did make me reflect on my consumer choices was the talk of trans fats and how butter is actually better for you than most margerines and low fat spreads.  There are good fats in butter which your body needs and again in moderation will do no harm whereas low fat spreads often contain high  amounts of trans fats which have the same affect of saturated fats on the body but are also linked to further health problems.  Maybe look for margarines that have less than one per cent trans fatty acids (check the labels) and are low in saturated fat. Or just don’t eat a lot of it!