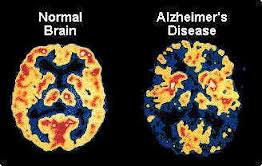 It occurs when two abnormal protein fragments called plaques and tangles accumulate in the brain and kill brain cells. They start in the hippocampus where memories are first formed.
Over time the plaques and tangles slowly destroy the hippocampus so it becomes harder and harder to create new memories. Simple recollections from a few hours or days ago, that most of us take for granted, are just not there. Gradually the plaques and tangles spread to different regions of the brain killing cells and destroying function wherever they go. The spread of these proteins gives the different stages of AD.
From the hippocampus the disease spreads down to the area of the brain where language is processed. Gradually the person finds it more difficult to find the words they would like to say.
Next the disease moves to the front of the brain where logical thought takes place. Very gradually the person begins to lose the ability to solve problems, grasp concepts, and make plans.
The next part of the brain that gets affected is the area of the brain responsible for emotions. When this happens the person loses control over moods and feelings.
As the disease spreads to the back of the brain the senses are affected. The person will gradually lose control of what they see, hear, and smell and even have hallucinations.
Gradually the disease reaches the back of the brain where our oldest and most precious memories are stored.
Near the end the disease affects a person’s balance and coordination and in the very late stages it destroys the part of the brain that regulates breathing and the heart.
The progress of the disease from mild forgetfulness to death is slow and steady and takes about 8 to 10 years.

Treatment
To date there is no medical cure for Alzheimer’s disease but there are effective treatments for slowing the progression of the symptoms and in some cases keeping the condition relatively stable in terms of the person’s functionality for many years.
People do well if this treatment is put in place early. However, you need to identify which stage of the disease the patient is at. If they are in the early stages then medication can be prescribed from a class of medications called Cholinesterase inhibitors.

How AD Drugs Work
Unlike a normal brain the Alzheimer’s brain shows a deficit in nerve cells that use the neurotransmitter acetylcholine. As more of these cells die off the symptoms associated with the different stages of AD will appear.
The acetylcholinesterase inhibitors (galantamine, rivastigmine, and donepezil) work by inhibiting the acetylcholinesterase enzyme from breaking down acetylcholine (ACh). These drugs increase the levels of ACh thereby increasing the communication between the nerve cells that use acetylcholine as a neurotransmitter. Without ACh parts of the brain begin to shut down, with it they begin to light up again.
Medication can help many of the associated symptoms of Alzheimer’s disease. These medications help with cognition, such as memory, but also help with behaviours that are associated with Alzheimer’s disease, for example depression and paranoia.
A more recent class of drug is Namenda (Memantine). This acts on the glutamatergic system by blocking NMDA glutamate receptors. It works by reducing excitotoxcity which is the process by which nerve cells are damaged or killed by excessive stimulation by neurotransmitters such as glutamates.
Which class of drug you take will depend on how advanced your condition is. People with mild to moderate Alzheimer’s can take donepezil, galantamine and rivastigmine. However, not everyone can take AChE inhibitors either because they react badly to them or their disease is too advanced. The alternative to AChE inhibitors is Memantine which can also help manage server Alzheimer’s disease.

As these medications only temporarily prevent the symptoms of AD there will come a time when it will be no longer worthwhile taking the drugs.
The treatment of Alzheimer’s disease is not just a case of prescribing medication but is also about making sure the person continues to be physically and mentally active. Healthy eating and reducing alcohol intake can play a significant role at this stage. Organising a good care regime and ensuring the person has the correct environment is also important.
This article was written by James from Oakhouse Foods – providing meals on wheels and working extensively with organisations involved in caring for the elderly and disabled.